The Wild and Wonderful CMH Cariboos Via Ferrata 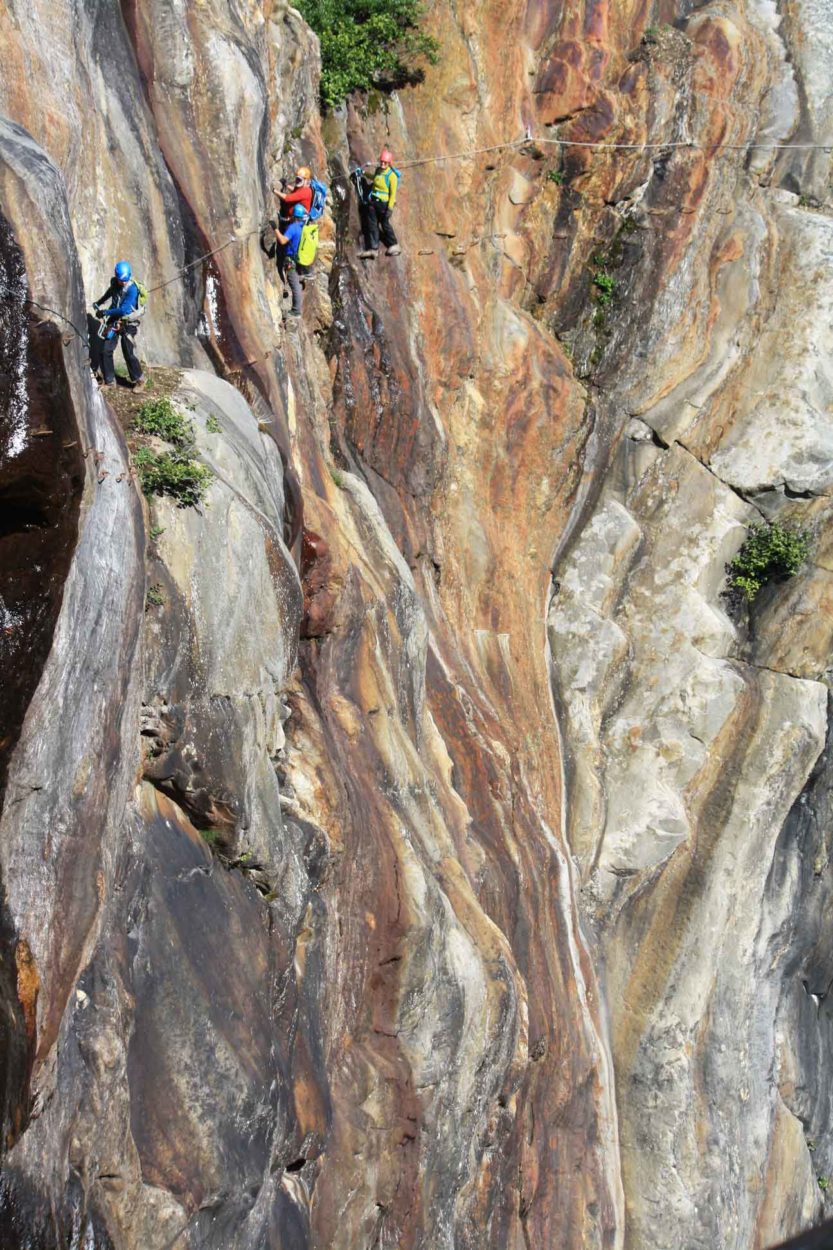 Via Ferratas are becoming more and more popular throughout the Canadian Rockies, and for good reason! They give people the sensation of rock climbing with the safety of being constantly tethered to a metal cable and convenient hand and footholds to help you along the way. No experience is needed to enjoy a Via Ferrata. But that doesn’t mean they’re easy!

This was not my first via ferrata, or my second, and I was so excited to fly into CMH Cariboos Lodge for a backcountry adventure that included their newly constructed Zillmer Canyon Via Ferrata. I’d heard amazing stories, and seen some great photos, so I couldn't wait to try it myself. Spoiler alert: it was awesome!

This Via Ferrata is accessed via helicopter, which is an experience all to itself. A short hike and hook-on and we were ready to go. There was the usual safety demonstration and some short, easy sections to get used to the clips. Then we were walking across a 4x4 spanning a deep chasm with a huge waterfall cascading beside us and the runoff rushing under our feet. The water sprayed us with mist as it thundered beside and below us – the noise of the falling water in the chasm drowned out everything else, giving us a singularity of crossing that wooden plank. This was the famous Zillmer Canyon. It was intense! And it was just the beginning of this amazing adventure.

We climbed along the canyon, with the rushing water all around us and the mist soaking our gloves and faces. We were dressed in our rain gear, so we were mostly dry. Damp rungs add another element to the usual Via Ferrata experience. And the excitement of the water added beauty and intensity to the climb.

After climbing up from the bridge, we traversed along the canyon and climbed up – straight up – beside the waterfall. What a rush! There were some technical sections too, that were surprising and challenging to conquer. Our guide, Adam, was amazing at talking people through the tough spots. He seemed to instinctively know who needed the extra help, and who wanted to tough it out on their own. Like all of the guides working for CMH, he was experienced, calm and exactly who you want coaching you through some “stressful climbing sections” in the mountains.

Once out of the deepest part of the canyon, we had a long traverse and some more straight-up sections to get to our lunch spot. CMH makes sure you have an amazing lunch, and we all felt as though we had earned our meal this day! We parked ourselves in a safe spot where we could unclip and strip our waterproof layers. Adam assured us we would “most likely” stay “fairly dry” for the rest of the day, so they weren’t necessary under the sun.

When it was time to clip back in, we were ready for the next obstacle: the suspension bridge. This bridge has large gaps, with each board falling in line with an average footstep. Because, you know, regular suspension bridges spanning deep chasms filled with rushing water aren’t intense enough. I crossed behind Adam to take picture of the rest of the group. We had been hiking together for a couple days by this point, and we became friends. It was great to encourage each other along and capture photographs that we could share at the end of the day.

Onwards and upwards! We climbed more technical sections of rock, crossed more wire bridges, walked along more wooden planks, crossed the river on a zipline and had countless moments where our breath was taken away completely from the stunning beauty of Zillmer Canyon and the Cariboo Mountains.

The top of the canyon was a large bowl ringed by glaciers and tall waterfalls. We were awestruck and we walked for a half hour in silence, just soaking in the beauty that surrounded us. We stopped for a second lunch break – because two sandwiches meant two breaks – before continuing to the next wall. We were heading to Phase II of the Via Ferrata, which was apparently being finished this very morning. We could see two of the guides at the top and wondered how far along they’d be before we reached them.

Phase II was intense in very different ways than Phase I. The first part was technical, but the intensity came from the sound and motion of the rushing water all around you. The second part was constructed to be tough, with wide, stretched-out steps and sections that took more difficult paths. We were the first to try two of the new wire bridges, and for perhaps the first time in my life, I encountered something that made me question my balance.

Two-wire bridges look intense, but they’re usually fairly easy because you’re well balanced between your hands and feet. If you shuffle along, they don’t move very much, and you’re always surprised by how stable they really are. When the top wire is positioned ahead of the lower wire, however, they tilt you forward and force you to look at the rushing water, screaming past directly in front of you.

They’re also not quite as stable when you can’t balance your weight evenly on the lower wire. The inconsistent up-and-down movement of the wires, the volume of water roaring beneath you, the sideways shuffle you’re trying to make to get across this thing, and the fact that you’ve been doing this for hours and your muscles aren’t as fresh as they were in the morning morning, all combine to make this seemingly simple obstacle one of the most intense – and exciting – on the entire course.

Another 3-wire bridge was followed by an intense uphill climb. We could see the dust around the fresh drill marks made by the guides that morning. It was exciting to be some of the first people to set foot on these sections of the route, and it added to the sense of adventure.

One last push and we made it! The feeling of accomplishment combined with exhaustion was exhilarating, and we were all congratulating each other that we had survived an intense day of climbing. We had time before the helicopter came to pick us up, so we hiked up the ridge and explored the beautiful, glacier filled views of the alpine.

Our return to the lodge was met with more guests asking us about the experience as we shared our photos and videos. It dominated the talk of the evening, and even those who chose not to do the Via Ferrata that day were excited to see the images we brought back.

Like all of the adventures with CMH, the Via Ferrata can be customized to different skill levels. We were on the toughest route, but there are somewhat easier, and shorter, routes for those who want a lesser struggle. All of the routes include the intensity of the waterfall in the steep and narrow Zillmer Canyon, giving the rush of climbing beside the water while getting soaked with its spray.

This day was also a special moment for CMH: a new record was set for the oldest participant to complete the Via Ferrata. At 78, Tom was an inspiration to us all! He was given an award at dinner and we all cheered for his accomplishment.

The Via Ferrata may have been the highlight of my trip to CMH Cariboos, but it was just one of the many amazing days spent exploring this backcountry oasis. The day was marked by the same care and consideration that all guests experience when stepping into any one of CMH’s lodges.

I can’t wait to return.