A Festival Fit for a King: The 2019 Canmore Highland Games 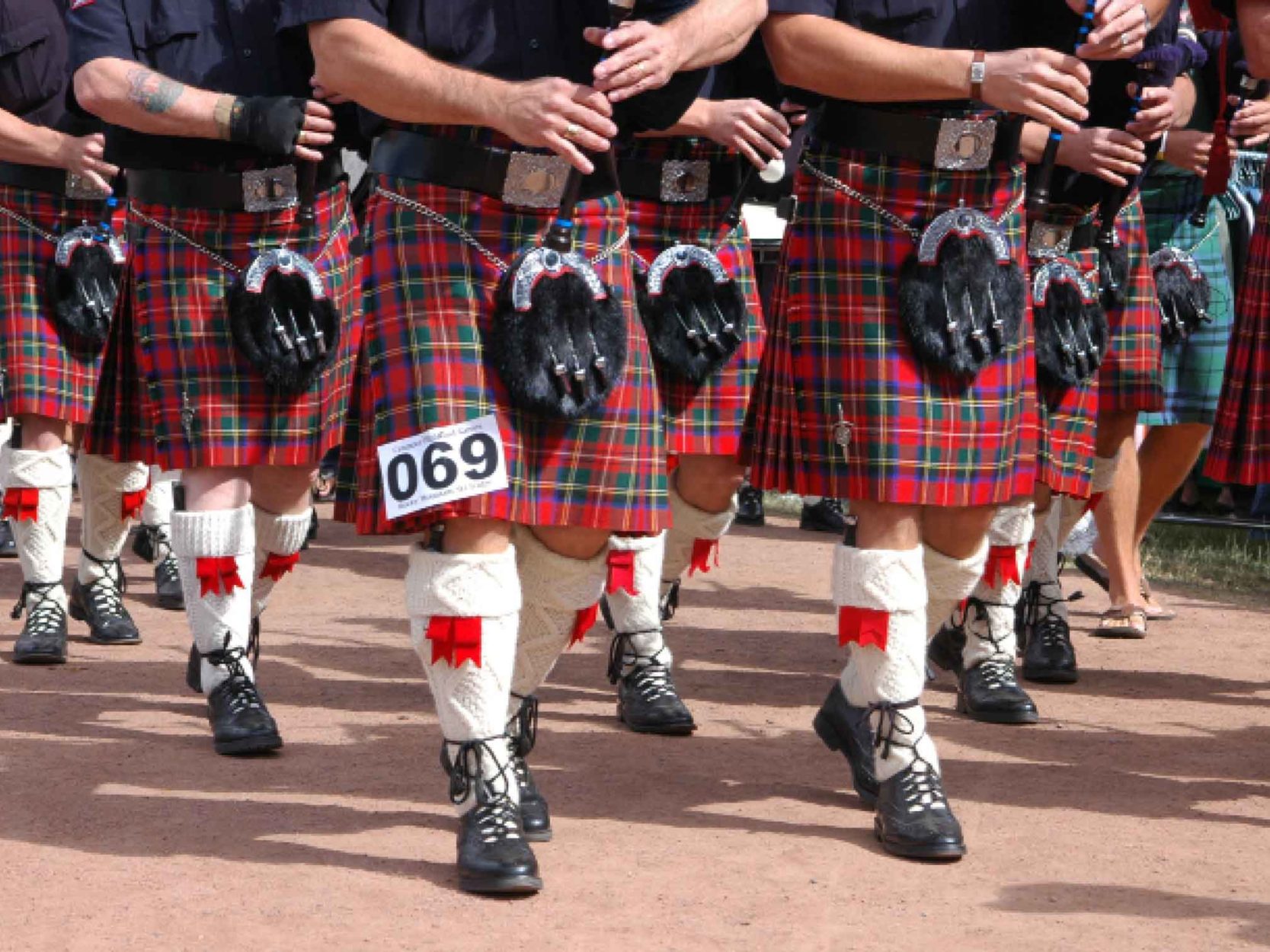 The Beginning of the Canmore Highland Games

It is very serendipitous that Canmore, named after King Malcolm: the creator of the Highland Games, would host its own Scottish games. The Canmore Highland Games were dreamt up by Donald ‘Don’ Patruth Garen. Born to Scottish parents who came to Canada in the early 1900s, Don was raised in Canada and served in the Royal Canadian Air Force from 1943 – 1945. In 1979 Don and his wife Dorothy, also an air force veteran, retired and moved to Canmore.

An avid volunteer, Don helped with many local organizations and events including the Canmore Museum, the 1988 Olympics and Canada Day celebrations. Being a veteran, Don was also heavily involved with the Canmore Legion, serving on the executive board and as president.

Through his connections with the Legion, Don helped create the Three Sisters Legion Pipe Band and the Three Sisters Scottish Festival Society. “Don made sure to surround himself with all the right people: the pipers, the drummers, the dancers and the athletes before he put on the games,” remarks Canmore Highland Games director Sandy Bunch. Dorothy also contributed to the games. An accomplished weaver, she designed the official Tartan of the Canmore Highland Games, which you can order to make your very own kilt or skirt.

With everything in place, the first Canmore Highland Games came to Centennial Park in 1991. Sadly, the Garens passed away in the summer of 2018, but their legacy lives on as the games continue into 2019. 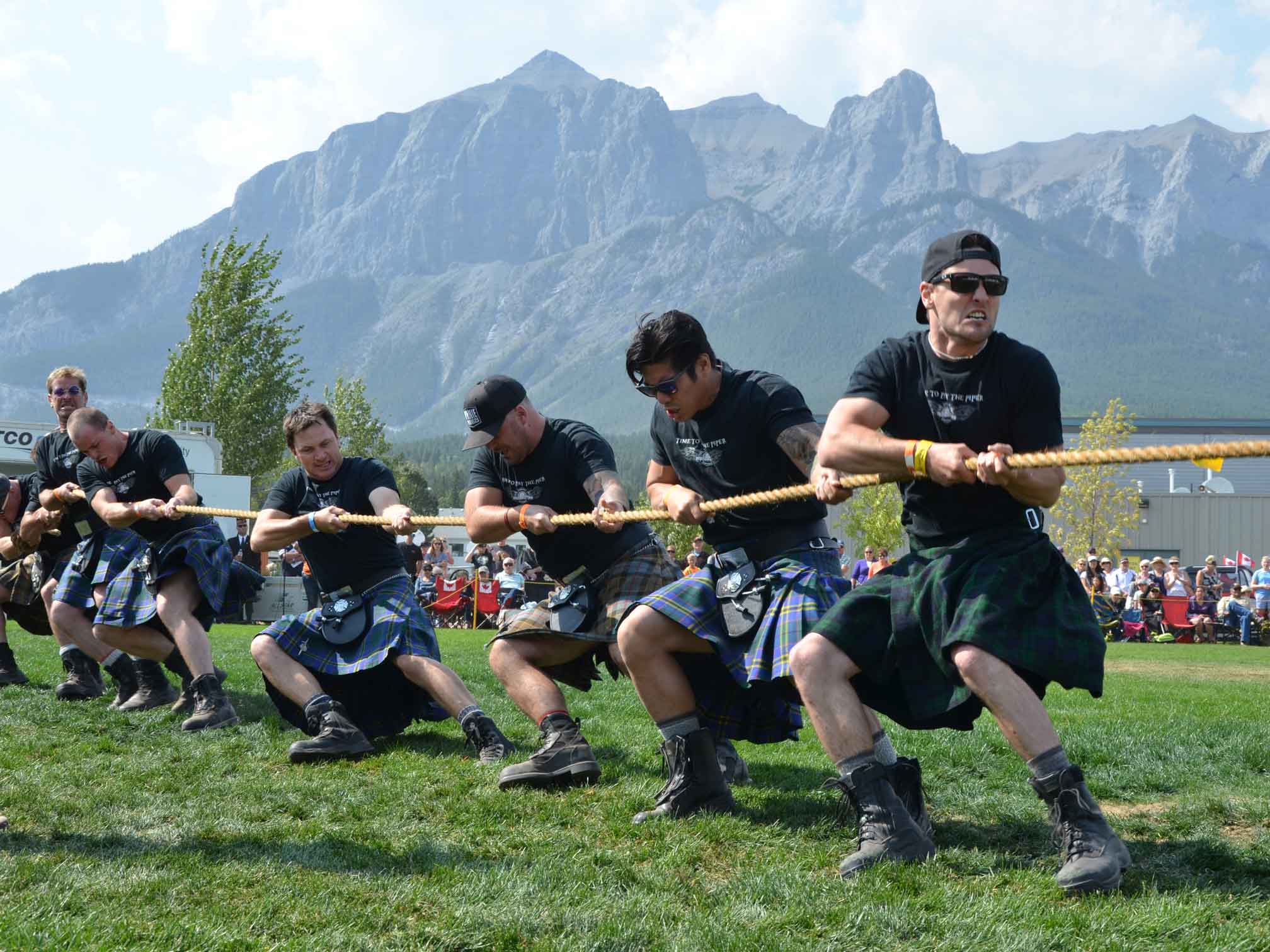 Sandy jokes that, “Before the games started you could fire a cannon down main street and not hurt anyone.” The Highland Games have certainly aided in Canmore’s burgeoning tourism industry as the festival brings in over 6000 visitors to the valley every year! Sandy is also very keen to emphasize the importance of volunteers. This event wouldn’t be possible without them!

The traditional events are certainly what draw people to the games. The heavy sports include Putting the Stone, Caber Toss, Hammer Throw and Tug of War. These exciting competitions offer a spectacle of physical strength that you really can’t see anywhere else.

It’s not all about throwing heavy objects though. Don’t miss the piping, drumming and highland dance competitions. These are a great opportunity to watch and listen to the sounds of the highlands. “The Ceilidh is pretty popular,” says Sandy.

Come under the Don Garen Festival Tent and partake in an evening of singing, dancing and merriment. The beer gardens and evening Ceilidh features headlining Celtic musical artists as well as highland dancers, Irish dancers and a guest pipe band. Musical acts include Cabot Crossing, Banda Taverna and the Johnny McCuaig Band.

You can’t celebrate all things Scottish without tasting some fine brews and scotches! The Taste of the Highlands event has booths offering samples of over 90 international wines and scotches, with experts to tell you all about them. Food vendors will also be available throughout the festival offering a taste of what the valley has to offer. Along with all these great festival events be sure to check out the Celtic market for something to show your Scottish pride!

Come and pay a visit to scenic Canmore from August 31 to September 1 and experience a weekend at the Canmore Highland Games!

Canmore Events Canmore Highland Games Things to do in Canmore