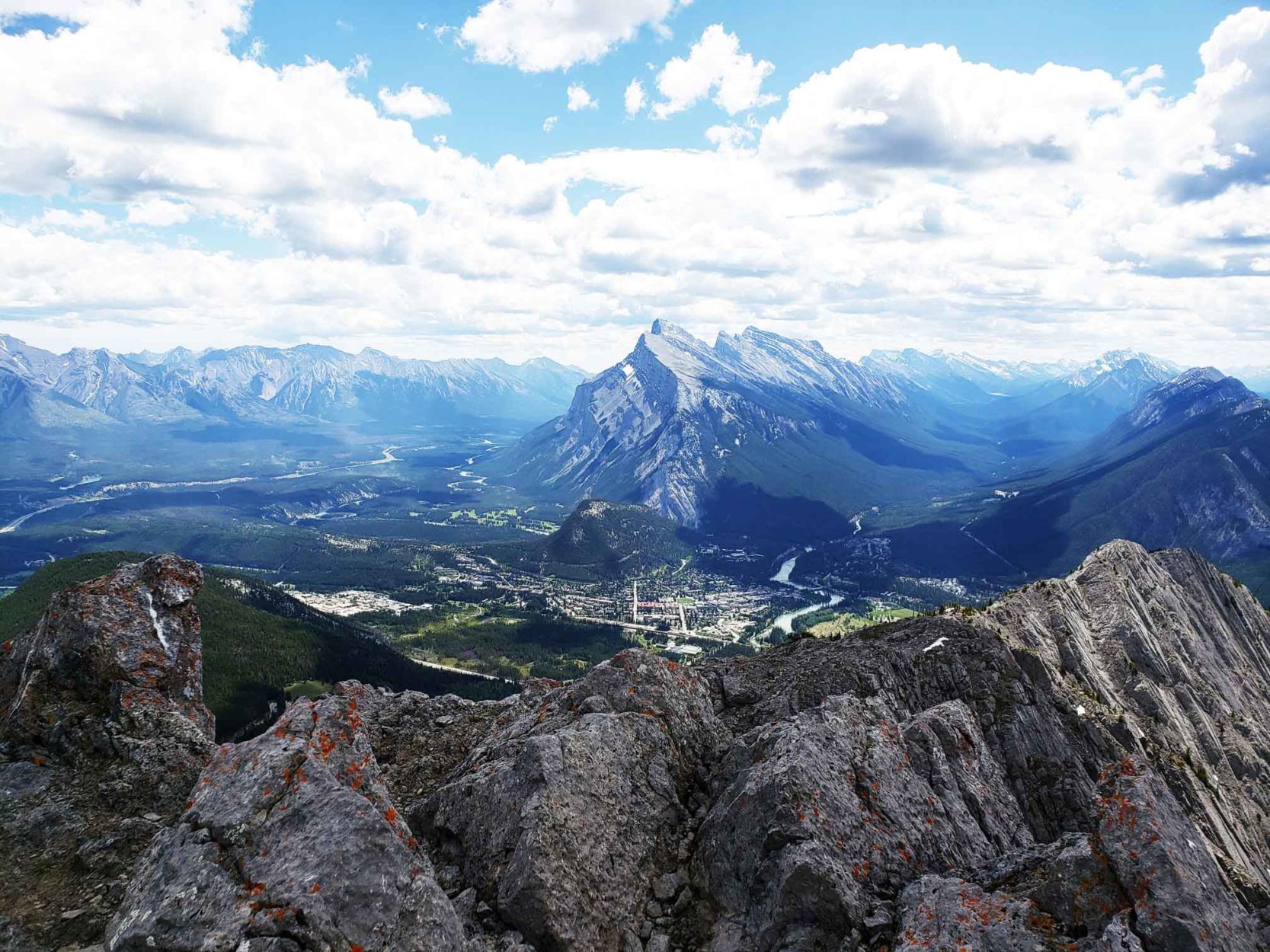 Have you ever been rock climbing? Me neither – which is why I decided to try a soft introduction with a Via Ferrata tour at Mount Norquay. This tour combines the top-of-the-world experience of clinging to a cliff face with the safety of steel cables and conveniently placed steps and handholds along the way. It’s wicked fun. And no climbing experience is needed!

The day started at 8:30 am at the North American Lodge. The last time I was here, I had a great time snow tubing at night. It was somewhat strange to look over the tube park and ski hill, now grassy expanses in the summer sun. Given my previous experience with Norquay, I was excited for an excellent day.

After checking in, we had a chance to grab our lunch, which was included with the tour, and a quick check over our gear to make sure we were prepared for the terrain ahead. It was my first real excursion in my new hiking boots from Kumpfy Shoes, and I was excited to put them to the test. If your equipment isn’t up to par, Norquay has rentals for you to use. They are free of charge with the purchase of this trip.

We met our guide, the experienced, ACMG certified Katsu Goto. He was everything you want in a mountain guide: calm, confident and encouraging. He double checked our footwear and made sure we had enough layers for the day’s weather conditions. It was sunny, warm and calm. There was a slight chance of thunderstorms later in the day, but we were confident we could complete our trip in the sunshine.

Katsu took us to get the climbing gear needed for the trek. The gear provided by Norquay includes a harness – with instruction on how to climb into the thing, lanyards for connecting to the steel cables that line the climbing route, a helmet to protect against falling rocks, and gloves to protect our hands on the climb down. Katsu explained the gear and its purpose as he handed it out. Satisfied that we were ready to go, we went to the first leg of the journey: a ride up Mount Norquay’s historic North American Chairlift.

I have to admit it was strange riding a chairlift in the summer. The trees were green and luscious with early summer leaves and the air was warm from the sharp summer sun. I had a moment of wondering how I would get off this thing without sliding on skis, but it was easy to step off once we reached the top.

When we reached the Cliffhouse Bistro, at the top of the chairlift, Katsu gave us a quick demonstration on how to use the equipment on a short test section. This gave us an idea of what to expect, and it gave him an idea about our skillset. We were going on the Summiteer Route, the longest Via Ferrata that Mount Norquay offers. At 6 hours of mountaineering, it was good to know we had the skills to make it. 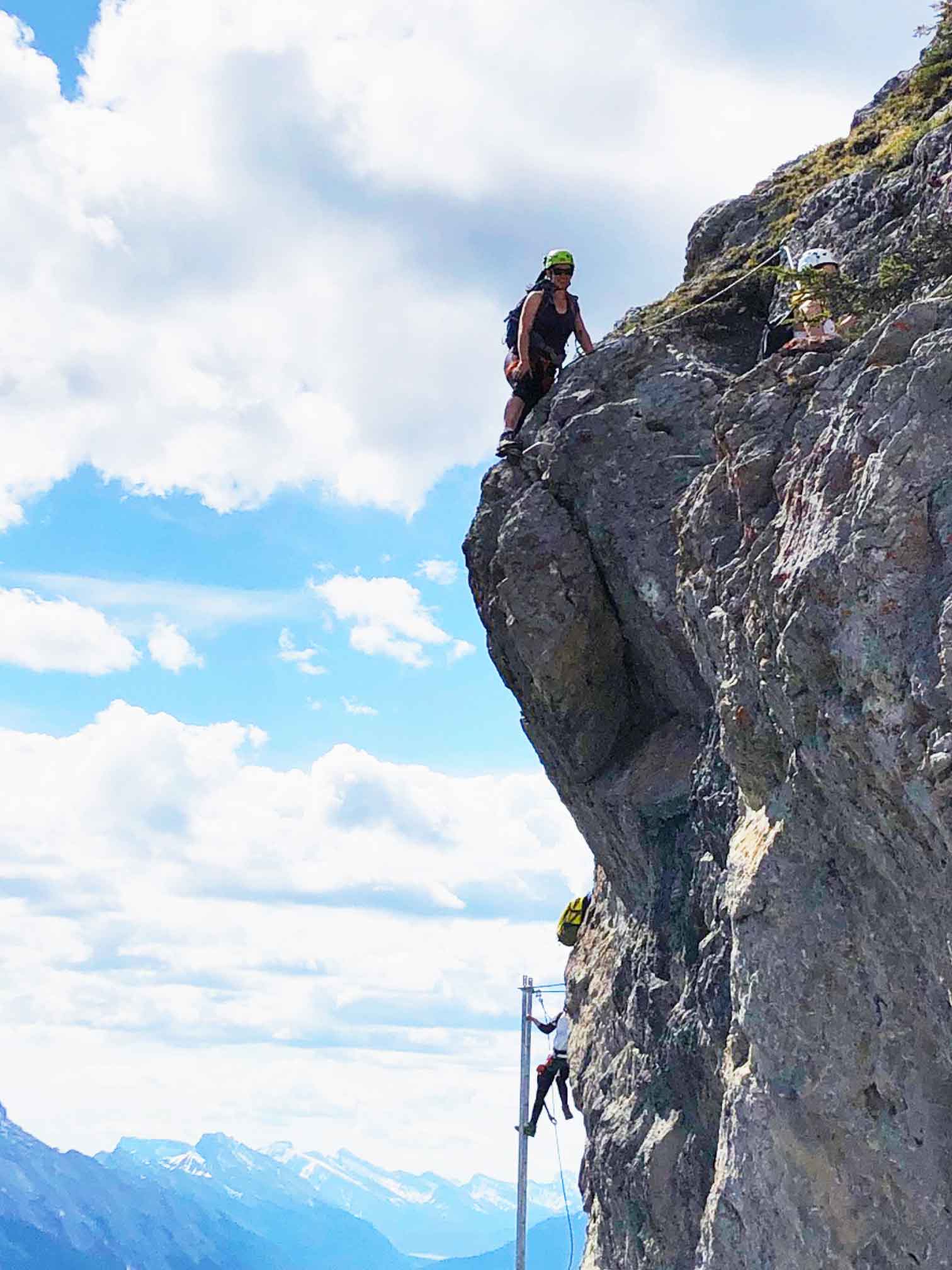 Here’s how it works: You have two lanyards attached to double-lock carabiners. Both of these lanyards attach to the steel cable that lines the climbing portions of the route. When you come to a connection, you unclip one lanyard, connect it to the next section, then repeat with the second clip. This way, you are always connected to the cable and always safe from slips and falls. Katsu recommended connecting to the next section as soon as possible, to reduce the fall distance in case you did slip.

And then we were off! We started with a short hike to the first climbing section. After the first awkward experiences of unclipping and re-clipping the lanyards across the many connections, it all became intuitive and the climbing became part of the experience. Katsu recommended using the cable to help climb, and it became second nature to trust it as a consistent handhold along the way.

The route consists of a combination of hiking and climbing, with some really intense sections and obstacles along the way! Our first obstacle was a 55m suspension bridge. It swayed with each step and as multiple people crossed, the sways became more and more unpredictable. It somewhat reminded me of walking on a boat in big weather. Except we were walking over a steep chasm that seemed to fall away forever! It was exciting – and stunning.

The mountain views surrounding us were breathtaking. Having lived in the mountains for years – and having guided in the backcountry in Banff – you’d think I would be used to the view. But every step along the route had amazing mountain scenery. Seeing it from the cliff face, uninterrupted by any obstacles, was a unique perspective on the landscape.

We crossed other exciting and terrifying obstacles. There was a two-wire bridge, which required us to walk sideways with our feet on the lower wire and our hands on the upper one. The three-wire bridge might sound more comfortable because of the addition of an extra wire, but it was just as wobbly as the suspension bridge and it was somehow scarier. We crossed this obstacle twice as we neared the East Summit of Mt Norquay. The final, vertical climb to the top was as exhausting as it was rewarding. 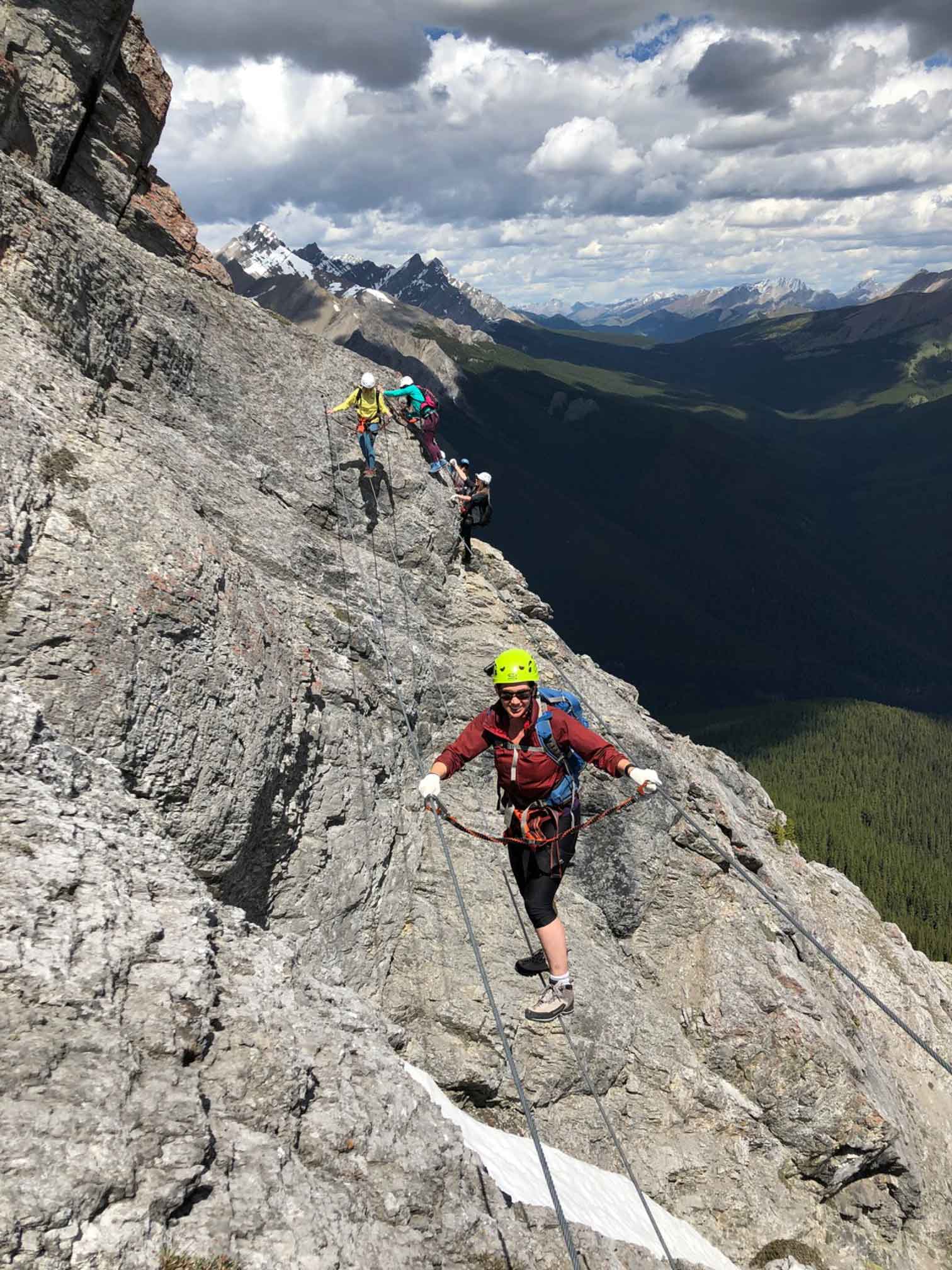 And then we were at the top! 360-degree views of nothing but mountains and the townsite of Banff nestled below. Wow. We ate our lunch at this breathtaking viewpoint surrounded by the Rocky Mountains. It was stunning.

All too soon, it was time to climb down. We wore the gloves provided and Katsu showed us the easiest way to navigate the steep sections: by walking backwards while supporting our weight on the steel cable. The gloves meant our hands wouldn’t be rubbed raw during this process. Climbing down has a very different set of challenges than climbing up. But after a steep descent and a final crossing of the three-wire bridge, we wrapped our lanyards around our waists and hiked most of the way back down to the Cliffhouse Bistro.

The hike was steep and rewarding, with a few sections of metal cable on the really steep sections. Katsu explained how large rocks were helicoptered in to make steps during this descent. It was an expensive addition to the hike, but it was a welcome relief on the steep trail. I’m pleased to say my new boots did the trick and I was comfortable during the entire hike down.

Our tour didn’t end when we reached the Bistro. We were rewarded for our efforts with beer or wine and charcuterie, all included with the price of the trip. We laughed, socialized and reflected on the experience of being wannabe mountain climbers for the day.

After another chairlift ride to the bottom of the mountain, it was time to go home. It was a day well-spent, and if ever you’re looking to try mountain climbing with the safety and security of a guided tour, I highly recommend the Via Ferrata excursions from Mount Norquay.