Running with the Wolves at Yamnuska Wolfdog Sanctuary 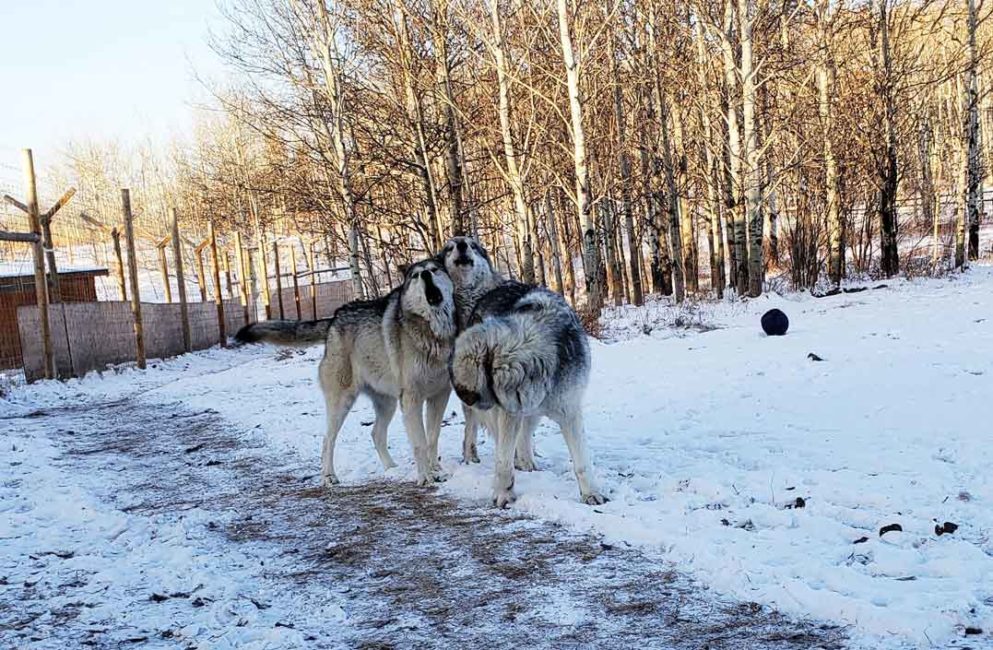 As an animal lover, I was very excited to visit Yamnuska Wolfdog Sanctuary and learn about wolfdogs. This beautiful sanctuary is about an hour east of Banff, and 10 minutes west of Cochrane. Don’t let the drive scare you! It’s a beautiful drive to an amazing sanctuary with stunning mountain views.

When you arrive at Yamnuska Wolfdog Sanctuary, you are greeted by Skookum, an Alaskan Malamute. Skookum is just as tall as some of the wolfdogs on the property and he is often mistaken as one of them. He’s HUGE! At 160 lbs, he’s probably bigger than most of the people on our tour! But he meets everyone with a smile before settling down for a nap with an eye on the door. I’m already in love, and I haven’t even left the gift shop! 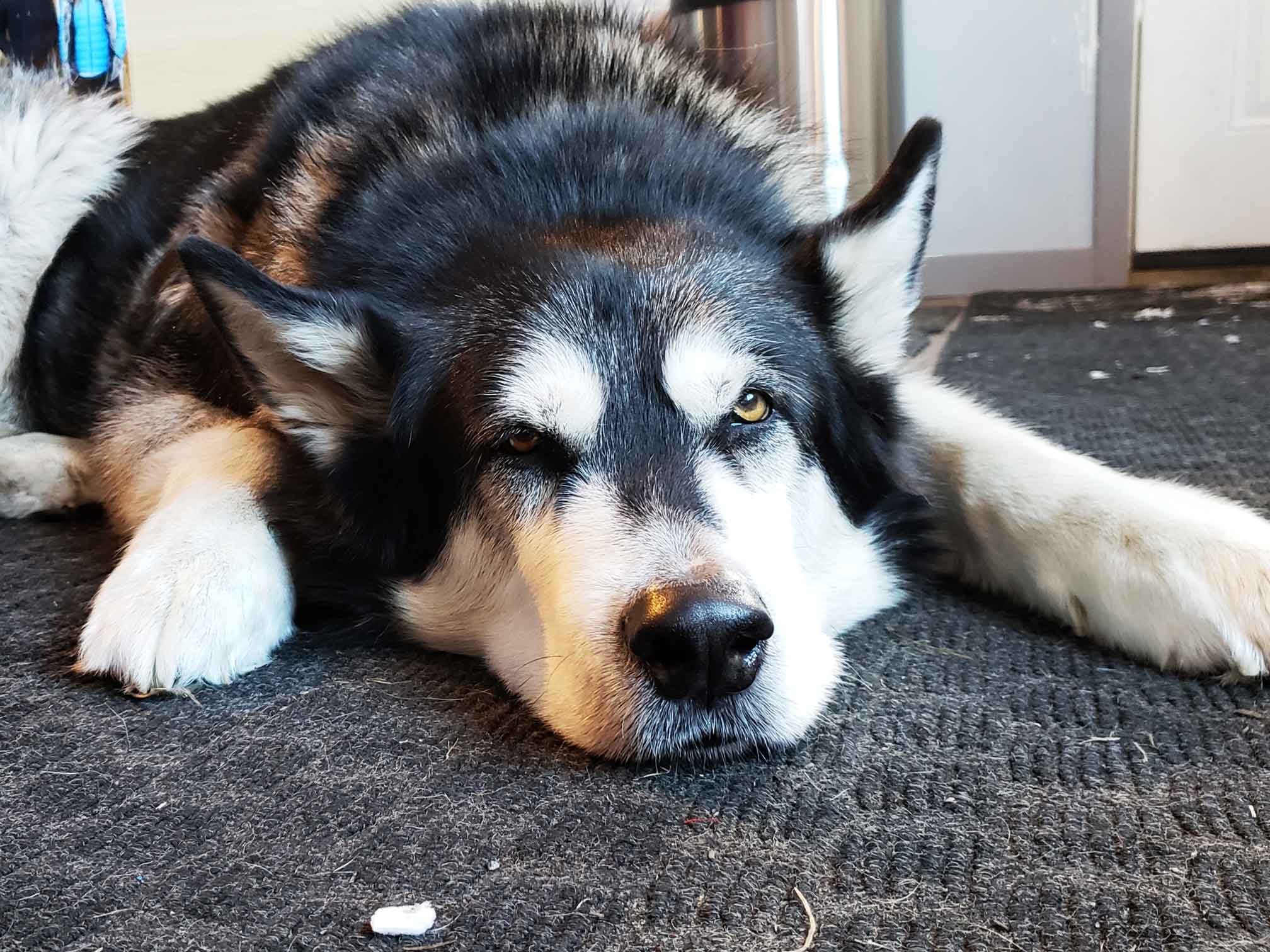 The sanctuary allows visitors taking the Interactive Tour and Intro Tour to enjoy the Sanctuary Walk. I arrived early to take this interpretive walk and learn about wolves and the importance of preserving natural spaces. There are some rules and a dress code. Wolves are attracted to fur, faux fur and anything dangling. The sanctuary also asks that you don’t call, whistle or otherwise try to entice wolfdogs. Wolves are afraid of people, and while dogs may love this attention, it’s terrifying for a wolf.

The wolfdogs are separated into their preferred packs. All of the enclosures are huge with trees, trails and obstacles that mimic a wolf’s natural environment. If the animals choose to say hi, they come up to the fence. If they’d rather do other, wolfey things, they have many places to hide. It’s the ideal setup for these skittish animals. 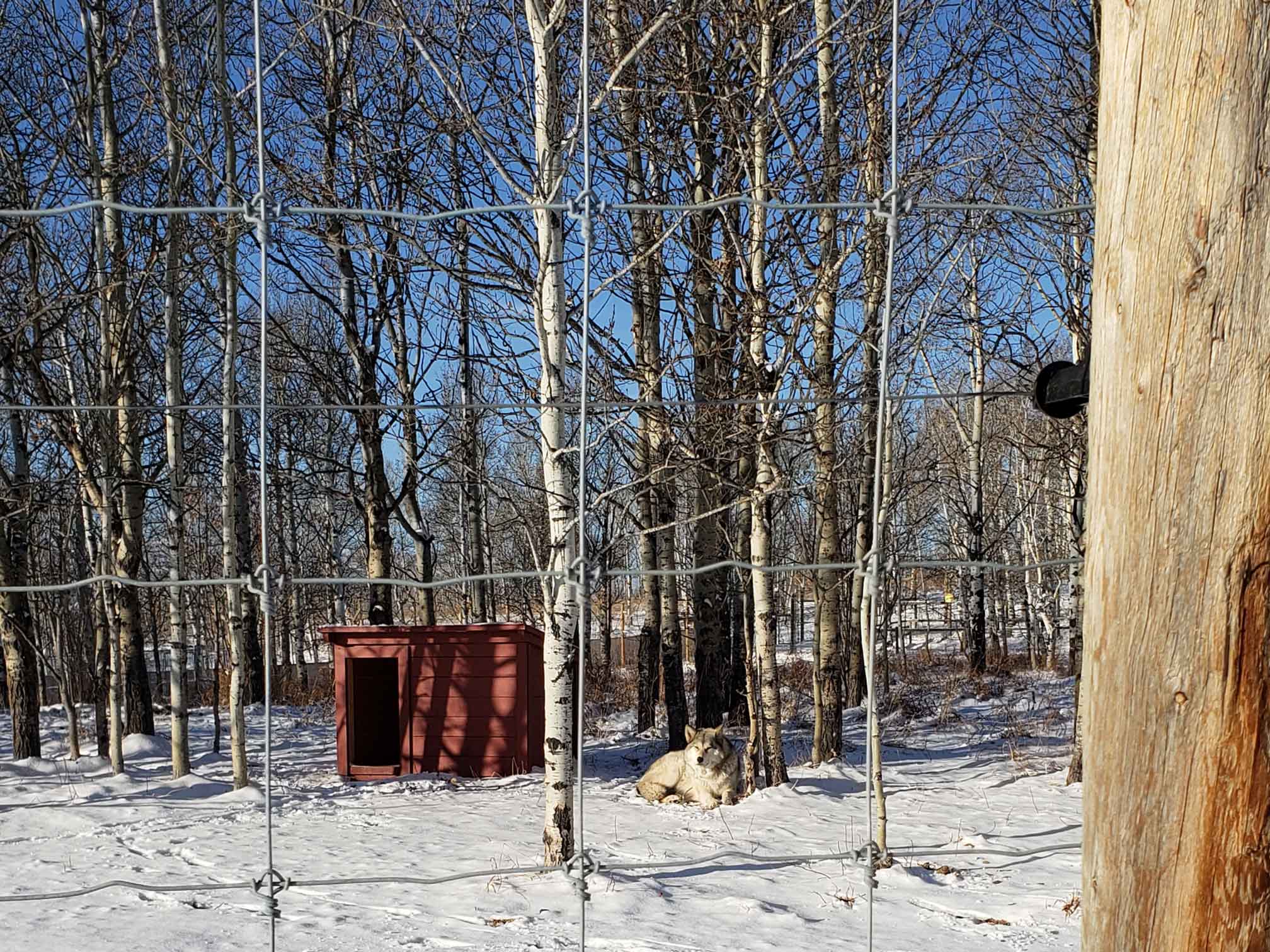 Along the walk there are signs with tons of information. Did you know that wolf kills are good for the soil? They add nitrogen and other nutrients, which enhance plant life in the given area. Wolf kills also feed many different species. These kills are just one of the many reasons why wolves are an important part of a healthy ecosystem. There was so much information packed into this tour, I had to take photos of the signs so I could digest them later.

During my Sanctuary Walk, I met Mauko, a low content wolf/husky mix. Because of her friendly demeanour, she is available for adoption to the right home. Wolfdogs aren’t for everyone, and Yamnuska Wolfdog Sanctuary promotes responsible wolfdog ownership. 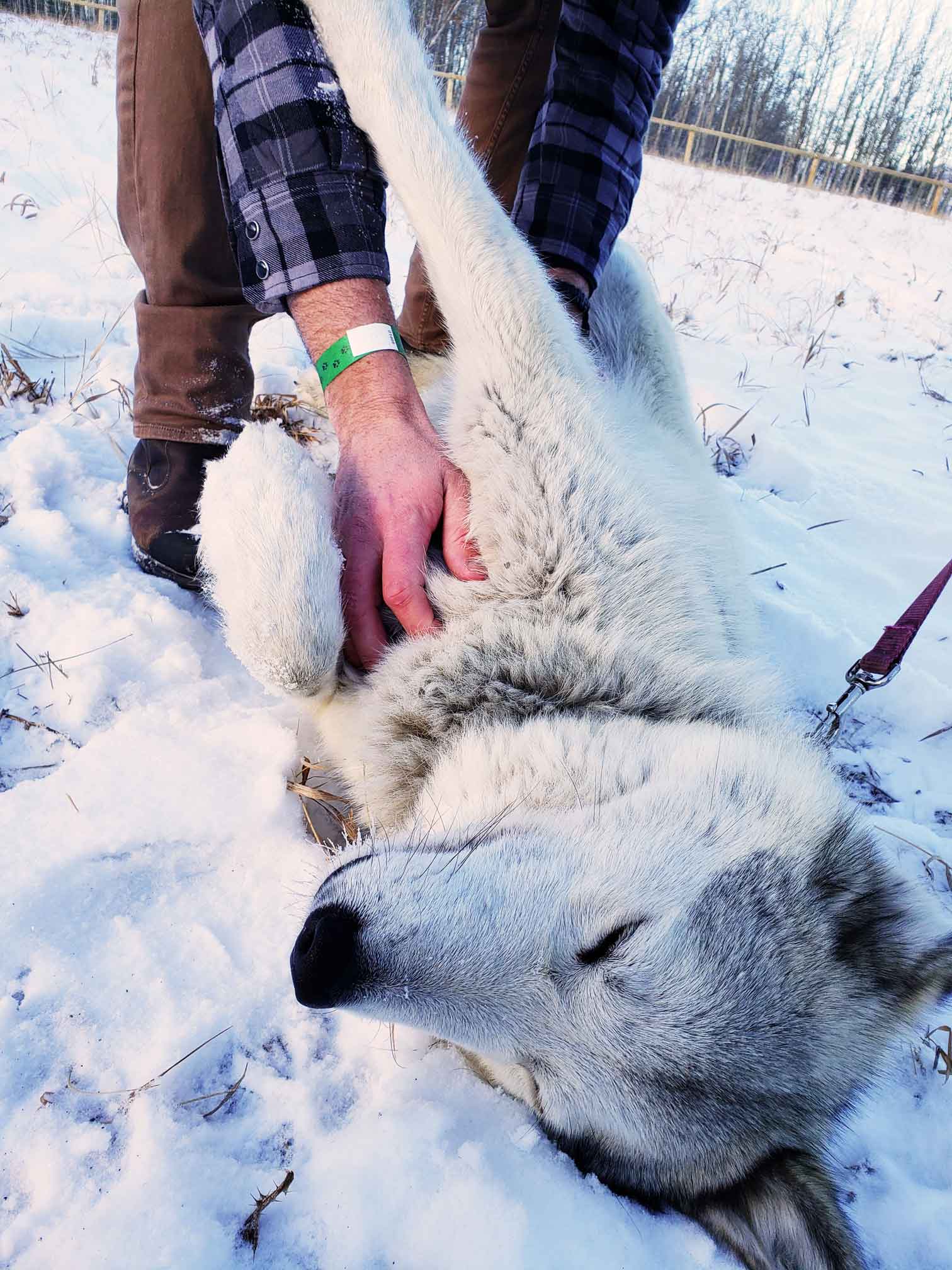 It was time to meet the wolfdogs. Our guide, Scott, brought us to the Yamnuska Pack, a high-content pack of wolfdogs. Scott talked about wolves and wolfdogs portrayed as ruthless killers who hunt humans. “We’re used to seeing wolves as scary all the time,” says Scott. From the time we’re little kids, hearing stories about the “Big, Bad Wolf,” to when we’re adults watching Hollywood entertainment such as “The Grey,” we’re inundated with images of wolves as scary and dangerous predators. 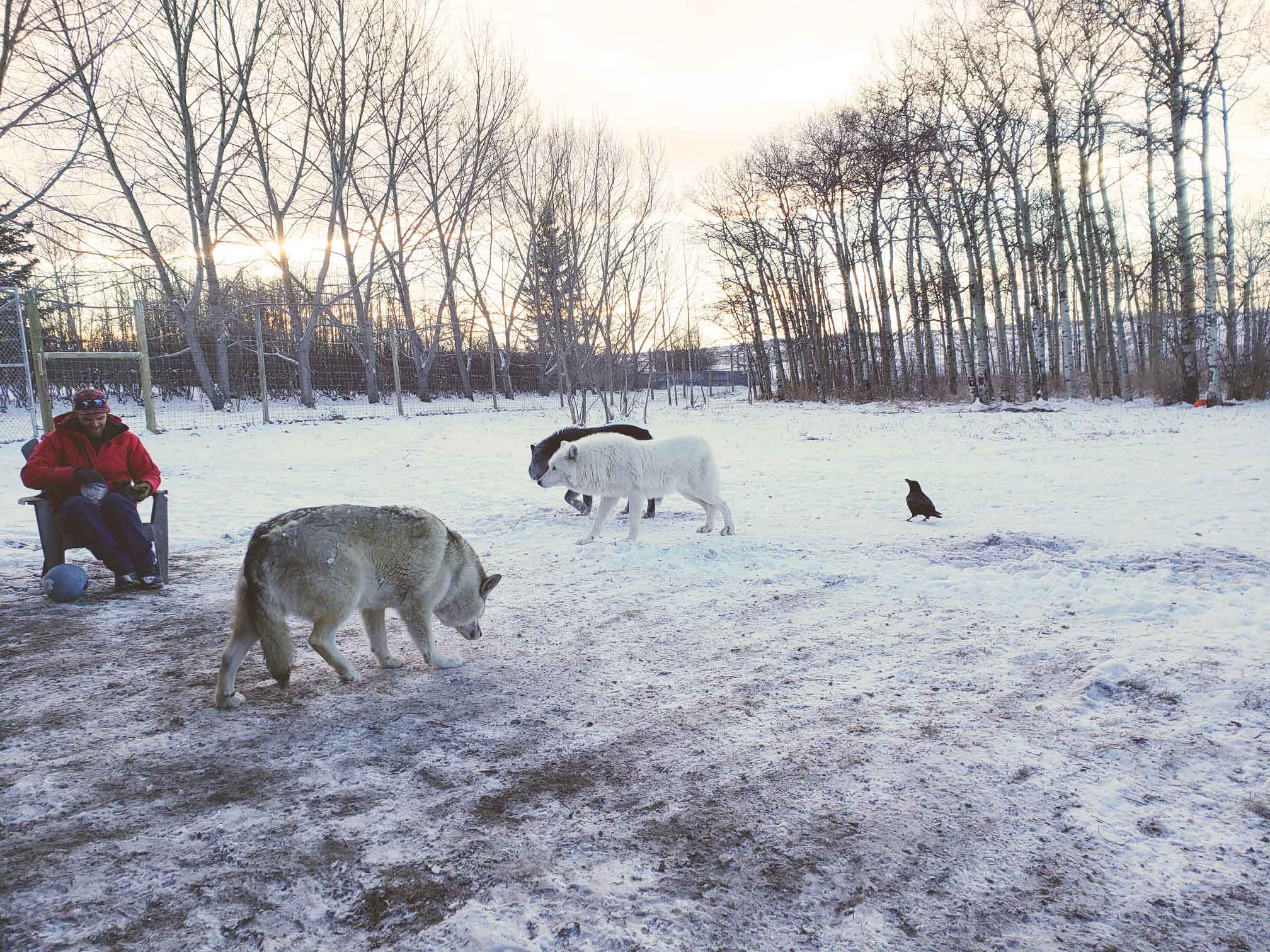 Even though these animals have been raised by humans, they won’t come too close.

This couldn’t be further from the truth! The high content wolfdogs in this pack wouldn’t come close, despite having visitors several times a day and getting treats on every tour. “They have thousands of years of instinct telling them they’re the top of the food chain with the exception of us,” says Scott, “Hollywood pushes the idea that they’re aggressive, but in reality, they’re afraid of humans.”

Even though we were all armed with treats, and Scott had extra tasty chicken hearts in his pockets, the wolfdogs wouldn’t come too close. We threw treats towards them and they hung out at the edge of our reach. They occasionally took a treat while keeping an eye on us. They frequently left, despite encouragement to stick around.

Scott then brought us to the Cascade Pack, a low-content pack of wolfdogs. Even though these animals were neglected, abandoned or otherwise displaced, they were very friendly. They come up for treats, interacted with strangers and even begged for more treats. It was a stark difference from the high content wolfdogs of the previous pen! They made for some great photo opportunities.

All the wolfdogs at the sanctuary came from people who legally bought them from breeders, likely for thousands of dollars. Wolfdogs have a lot of energy and intelligence, as well as strong instincts. They're terrible house pets. “It’s not people get bitten or injured by these animals, it’s that they’ve spent thousands of dollars on an animal that’s afraid of them,” explains Scott, “These animals present all of the challenge with none of the fun.” 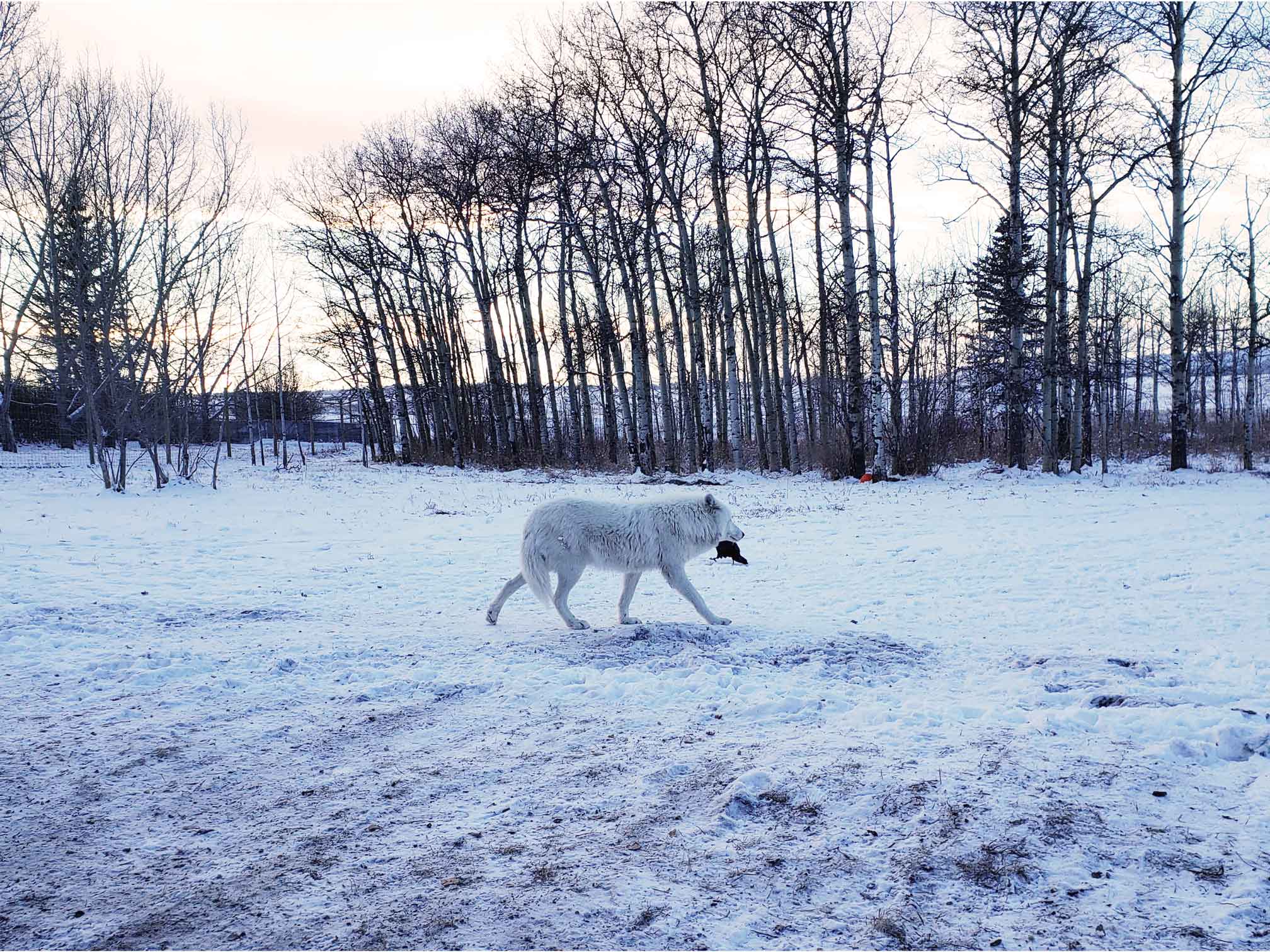 These expensive animals are generally afraid of people.

Unwanted wolfdogs need to go to a designated sanctuary or be euthanized. Yamnuska is the only wolfdog sanctuary in Canada, so they are often a last resort for these animals who, through no fault of their own, have been bred and sold to people unequipped to take care of them.

Yamnuska Wolfdog Sanctuary works to educate the public about wild wolves and what happens when these creatures crossed with dogs and brought into the home. They also operate as a rescue and safe sanctuary for these animals when things don't work out.

So how can you tell the wolf content in a wolfdog? It’s not that easy. There are no DNA tests that accurately determine wolf content. Certain tests are designed for dogs, but they do not measure wolf DNA. People talk about wolfdog percentages, but these numbers are often made up by a breeder to make their animals more appealing.

At the sanctuary, determining wolfdog content is observation based. There are some key differences between wolves and dogs. Wolf traits include: an inability to bark, unique coats, nails, and eye colour, and long, long legs. Scott compared Skookum, the malamute in the gift shop who weighs 160 lbs, to Kuna, a high content female wolfdog. Kuna is taller than Skookum, but only weighs 75 lbs. It’s all in those legs! 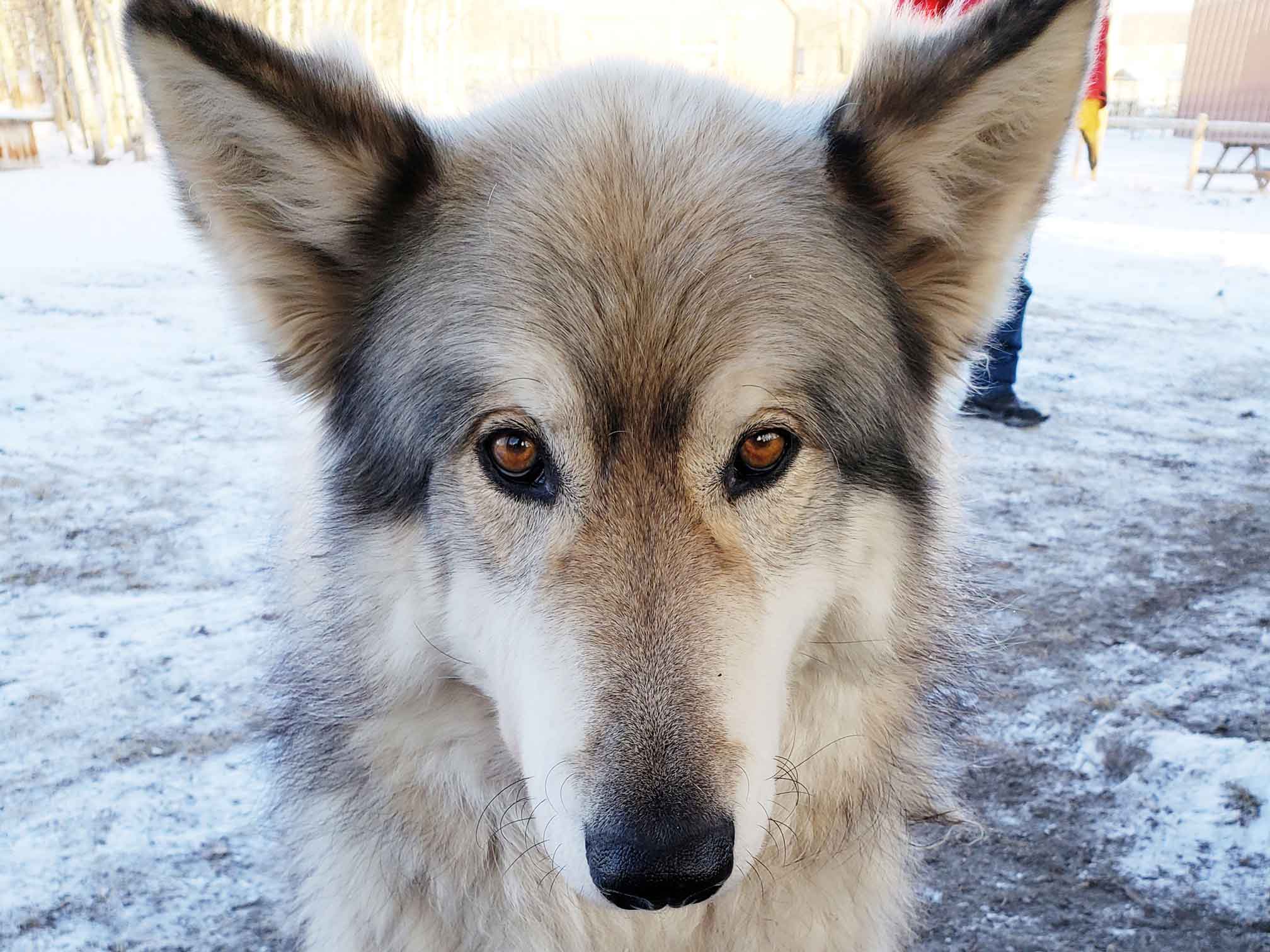 It's all in the eyes

Eye colour is an indicator of wolf content. Wolves have amber or hazel eyes and are genetically incapable of having any other eye colour. Blue eyes are a recessive dog trait. Often, blue eyes are photoshopped onto wolf images because humans perceive them as mysterious.

Wolves and dogs speak also different languages, or at the very least, different dialects of the same language. Dogs change roles frequently and initiate play with different gestures. Wolves have a heavy subtext to their body language. They enjoy play as much as dogs, but they place a high importance on pack hierarchy. This is partly why the sanctuary has so many packs. Mixing high content with low content wolfdogs creates language barriers. This can be dangerous for the low content animal who doesn’t speak the same language.

Our tour ended with the setting sun and we left to a course of wolfdogs howling. If you’re looking for that perfect wolf photo to mark your mountain vacation, try an Interactive Tour at Yamnuska Wolfdog Sanctuary and get close and personal with these amazing animals.