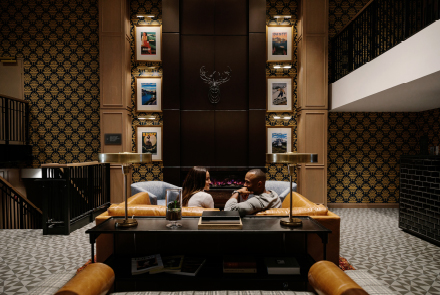 The Mount Royal Hotel has been in the heart of Banff for well over a hundred years. The history behind this classic Banff accommodation stretches back to the early days of the town and it stands as a physical representation of Banff throughout the decades. I was fortunate enough to get the Pursuit Mount Royal Hotel tour, but first, a little backstory.

On December 29, 2016, a fire wreaked havoc on the roof of the Mount Royal Hotel. This was not the first fire at the Mount Royal Hotel in its 111-year history, but it was the biggest in Banff in nearly half a century. After the blaze, the hotel shut down for 18 months while management picked up the pieces.

I had the privilege to speak to Stuart Back, Pursuit’s Vice President of Operations and volunteer fire fighter who helped fight the 2016 Mount Royal Hotel blaze. To get an idea of the severity of the fire, Stuart says it took, “Ten hours and ten thousand gallons of water to put it out. That water flooded the hotel from the lobby all the way to the pub down the street.”

The damage was immense. All the drywall in the hotel had to be replaced. The floor, redone just months before,  would have to be done again. The brand-new hot tub that was just installed on the lobby floor would also have to be removed. All of the rooms had to be refurbished. Every store affected by firefighting efforts had to get rid of their stock and renovate.

“We were very lucky to have teams from Lake Louise, Canmore and Exshaw come and help fight the fire,” says Stuart. The combined efforts of the fire departments ensured everyone got out safely. The generosity of the community ensured everyone found a warm place to stay for the remainder of their vacations.

Albeit catastrophic, the fire presented the ownership with an opportunity to rebuild hotel into a place to honour our heritage and provide modern hotel experiences. It was also an opportunity for me to go on a Mount Royal Hotel tour.

We took a step into the cold January morning to take a look at the façade of the Mount Royal Hotel. Stuart told me the hotel is made up of different pieces built over decades. “The property grew up with Banff. Its story is told through architecture." He also told me that each individual portion of the hotel has been accentuated to highlight the different styles. I’ve never stopped to notice before, but it’s true, each section of the building looks different from the next. These distinct sections prevented the fire from spreading to other parts of the hotel. When you notice this subtle architecture I could imagine the generations of locals and visitors this hotel has served.

The refurbished lobby is adorned with vintage posters and custom-made furniture. It features a pop-up museum with heritage artifacts provided by the Whyte Museum of the Canadian Rockies. The selection of objects also changes occasionally, so it’s worth stopping in now and then. The new centrepiece of the lobby is a modern fireplace with a metal buck head sculpture, made by an Albertan blacksmith. This is meant to echo the past where it was more common to hang real animal busts. Also, right off the lobby is Tony Roma’s, which also had to shut down and remodel after the fire. I knew where I was going to stop for breakfast.

The new additions on the second floor are the General Store and the library. The library provides a quiet, well-lit space with a collection of books, free wifi and a courtesy laptop to keep you entertained on cold days. The General Store, meanwhile, offers ready-made snacks for guests on the go and sundries for whatever you need during your stay.

Stuart pointed out to me that each portion of the hotel has a unique design and décor with different paintings, furniture and room styles. Each piece of the hotel is marked with a little plaque telling you the year in which it was built.

“Originally the hotel was difficult or inaccessible for guests with mobility issues,” Stuart remarks. To counter this, they’ve added lifts, ramps and special elevators to allow their guests access to every area of the hotel from the lobby to the top floor lounge.

I was shown a few of the rooms. Each one has a custom-made quilt headboard. “This is intended to be a metaphor for the hotel,” Stuart says, “Like a quilt, it has been stitched together, taken care of and passed down through the generations. ”The rooms have an vintage feel to them with the added benefit of contemporary amenities like private bathrooms with modern fixtures. 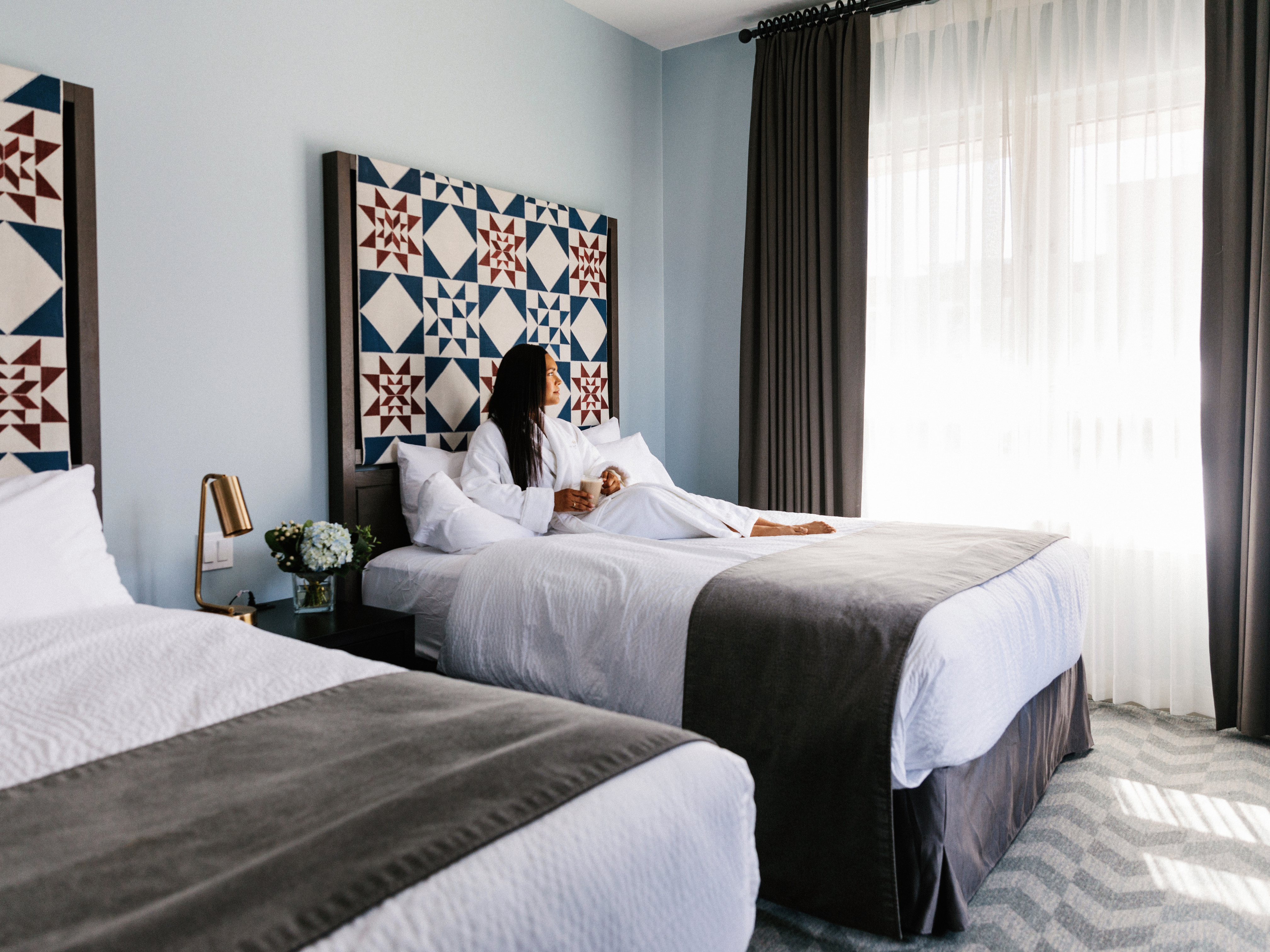 The Centennial Room. Photo by Pursuit

The top floor used to house two big suites and a deck. Rather than restoring these dated fixtures, the management decided to redo the entire floor and make it into something special for guests. I’d say the change was for the better. 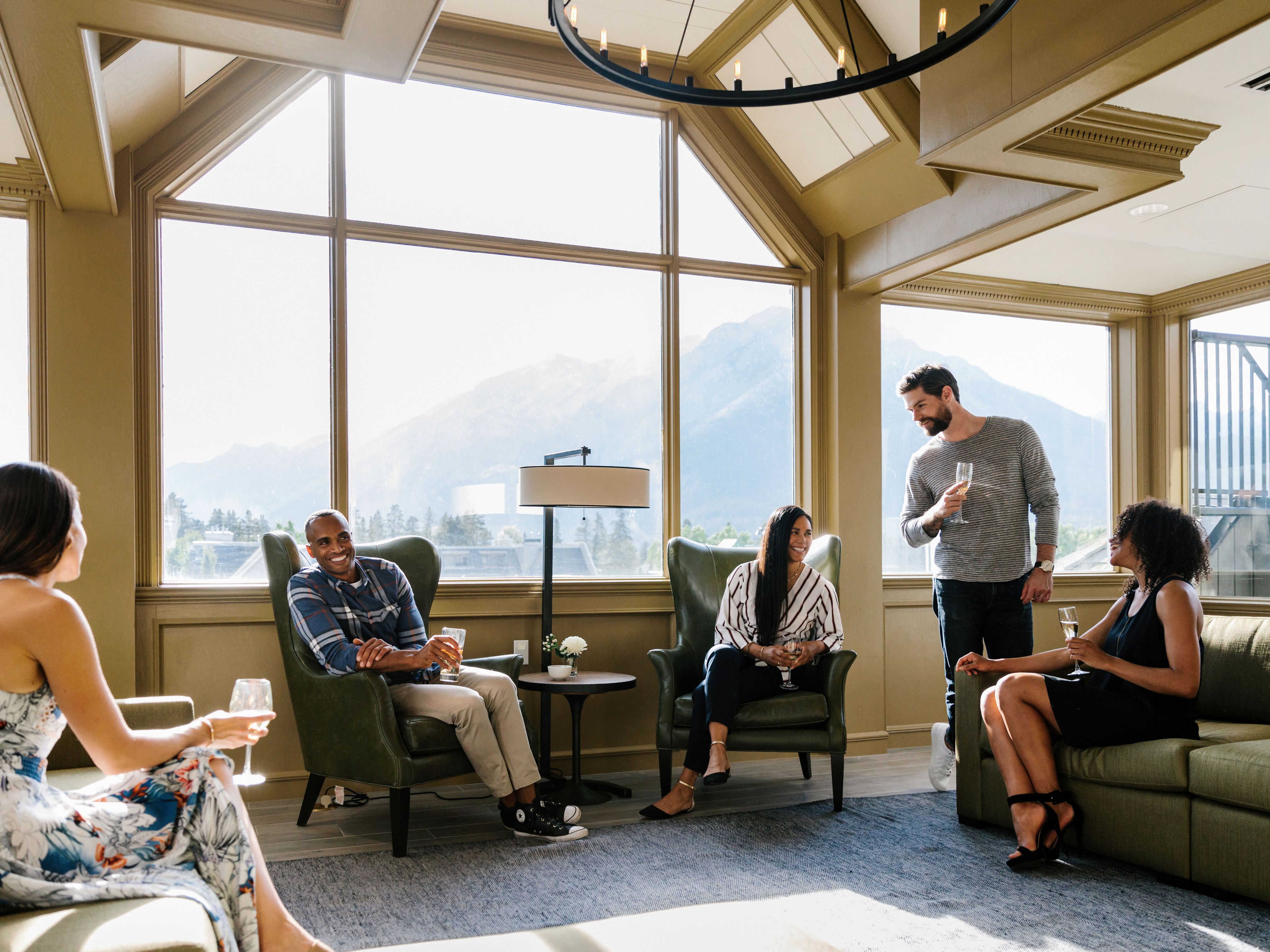 Instead of rooms, there’s a rooftop lounge serving drinks and snacks, including charcuterie and pizza, from 4 until 10 pm. The only thing left over from the rebuild are the spectacular views. From above you get a clear view of Banff avenue and the majestic mountains beyond.

They also feature hot tubs! Step onto the outdoor terrace and witness even more amazing views while you have a soak after a long day exploring the Rockies! The deck is complete with overhead heaters to make sure you don’t get cold coming to and from the terrace. A ramp makes the hot tub area accessible for everyone. 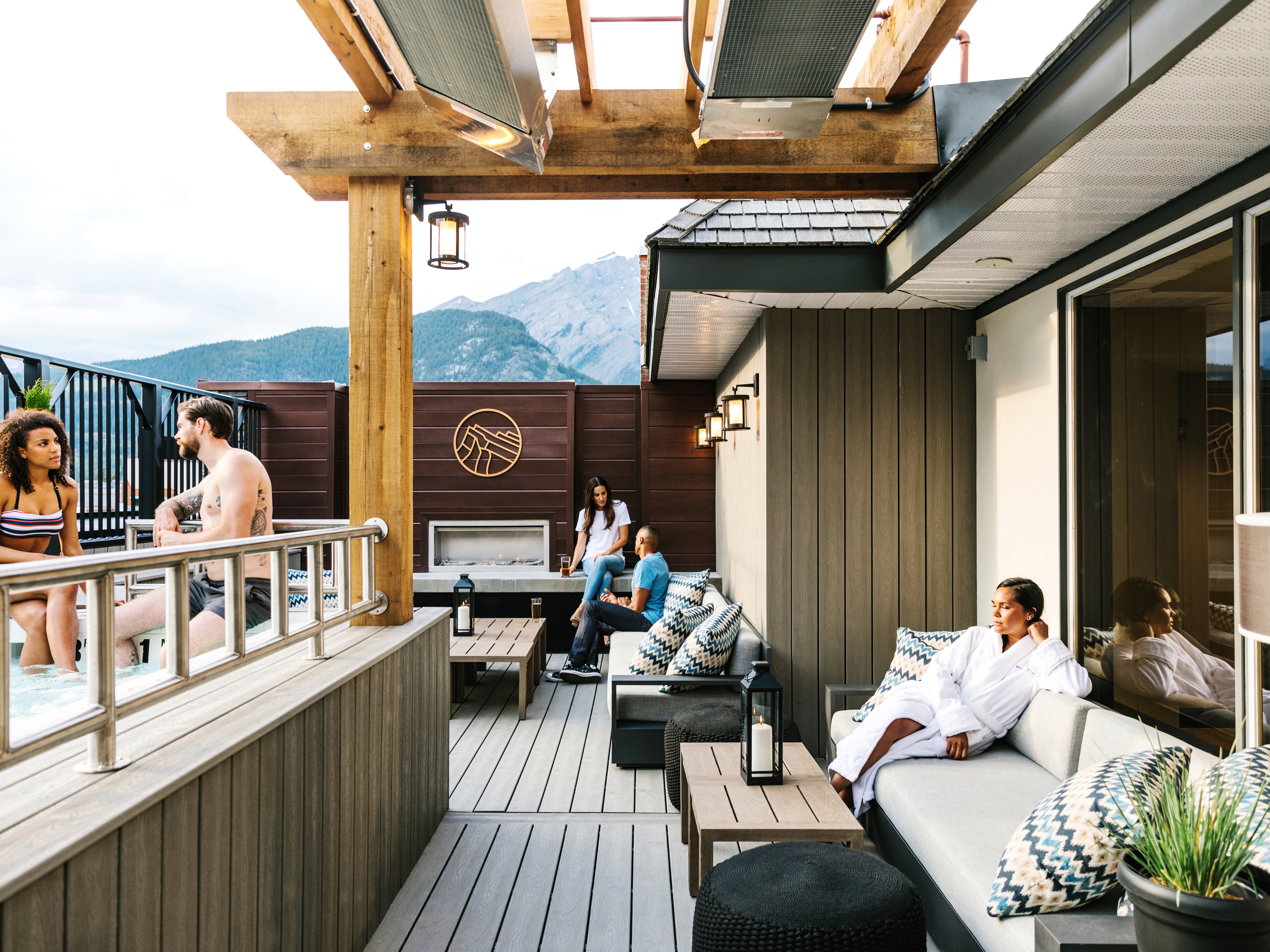 Stuart summarizes the Mount Royal Hotel by saying, “I’ve been to hotels all over Banff and there’s nothing like it.” I agree with him. Granted, I live in this valley, so I don’t often get to stay in its hotels. My Mount Royal Hotel tour really made me want to stay there, its a great location.