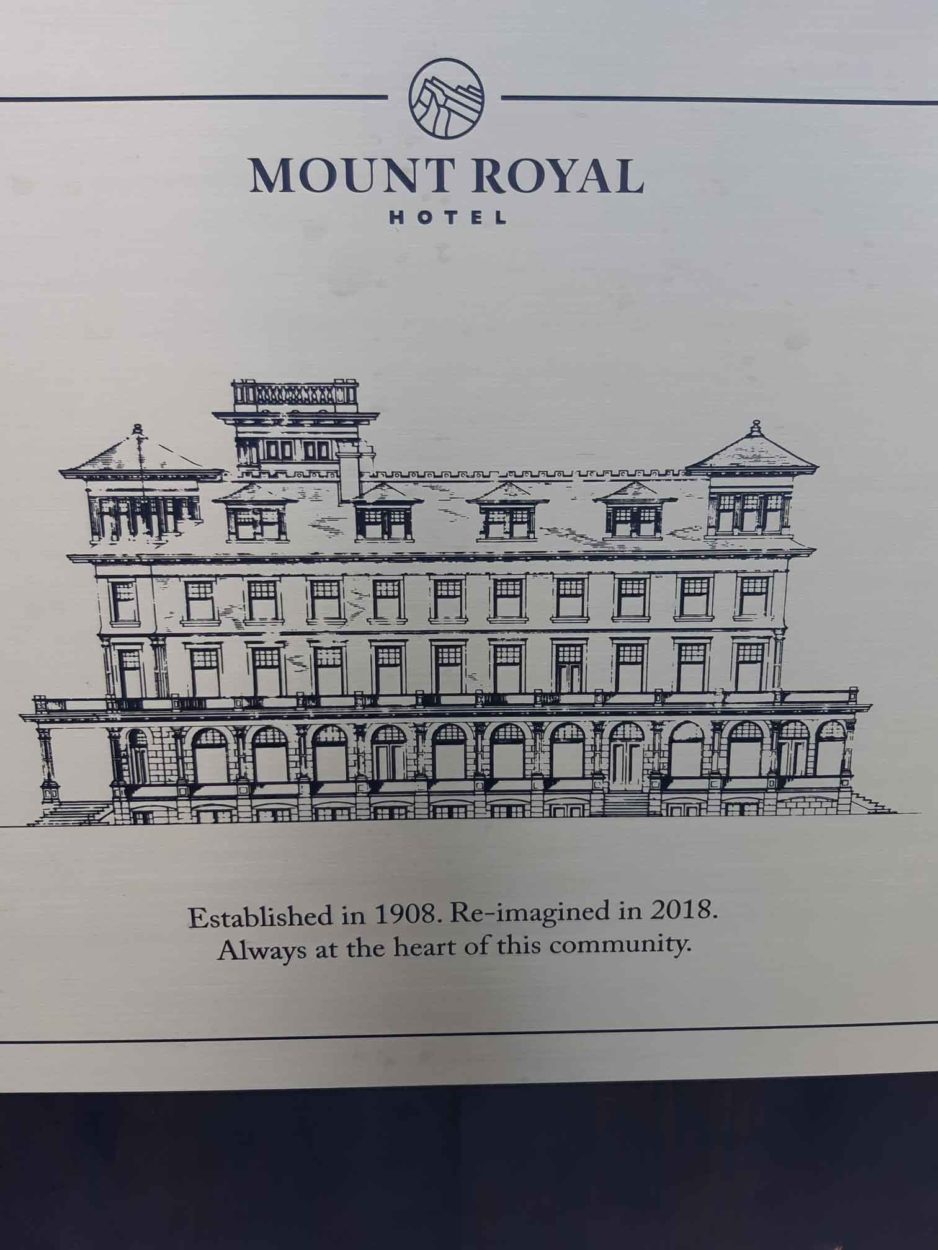 The original wood building that made up the first portion of the hotel opened its doors in 1908. Four years later, the hotel was bought by the Brewster family. Brewster, now operating under the name Pursuit, has been managing, upgrading and taking care of the hotel since 1912.

In its 111 years of operation, the hotel has slowly expanded further and further down Banff Avenue. It currently houses an assortment of shops and restaurants, including Tony Roma’s. Although connected internally, the exterior of each expansion is marked by a different architectural style.

There are four sections that make up the Mount Royal Hotel. The first is the lobby, which is where the original hotel once stood. After that is the 1940 expansion. Originally an empty lot, it brought new street level shopping to the avenue. Next to come up was the 1955 expansion, which is where the old Mount Royal Garage used to be. Then there is the 1992 expansion, which absorbed the old Cascade Hotel. The final expansion completed the Mount Royal Hotel’s takeover of the block.

Each section of the hotel has different room sizes and styles. This is an intentional choice by the hotel to preserve the authenticity and uniqueness of each building’s architecture. The 1992 section is the only portion that wasn’t built from the ground up. Since the Cascade Hotel was shorter than the Mount Royal by a few feet, a tiny staircase had to be installed to connect the hallways.

The layout of the hotel is also indicative of the building’s heritage. Modern hotels normally break up the hallways to make the space feel more intimate. The Mount Royal has very long hallways. This is the result of the stylistic sensibilities during the time they were built. The exception is the Cascade section, where 70% of the rooms here were intended for families, so they are broken up into blocks with connecting rooms. These blocks are perfect for a family vacation or a skiing trip with friends! To break up the visuals of the hallways, the doors are colour coded to mark the transition between each section of the hotel.

The lobby section has its own unique story. It was the original space for the 1908 Mount Royal Hotel. A fire in March of 1967 completely destroyed that portion of the hotel. Luckily nobody was hurt in the fire. The destruction prompted management to rebuild this section and modernize it.

According to Stuart, the original 1967 lobby was very dark and closed off. This section of the hotel had to be remodelled once again after the 2016 fire. Today, that lobby has been opened up with plenty of natural light and decorated with paraphernalia that pays homage to the old 1967 lobby.